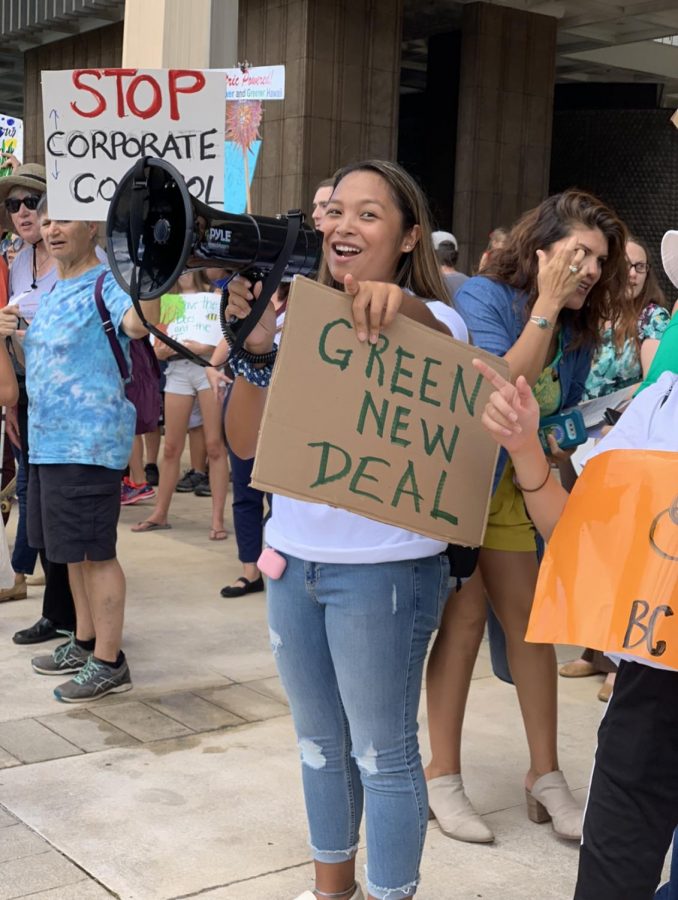 Cayla Pabo (12), leads a chant at the Youth Climate Strike held at the State Capitol on September 20th, 2019. Pabo is currently the President of the MoHS Club Terra.

In recent years the effects of climate change has become more urgent with the rising temperatures and sea levels. According to the U.S Global Change Research Program, climate change is caused by “Human activities, especially emissions of heat-trapping greenhouse gases from fossil fuel combustion, deforestation, and land-use change, are the primary driver of the climate changes observed in the industrial area.”Climate changes will have effects such as heat waves and severe floods that are heavily impacting Hawai’i.

Climate change will affect Hawai’is way of life such as water supply, agriculture, and transportation. The Hawaiian Islands will see an increase in temperature and sea levels that will have an impact on the civilians and the land they call home. According to Hawaiibusiness.com, sea levels will rise by 3.2 feet by the end of the century or even as soon as 2060 Waikiki Beach, Ala Wai Boat Harbor and Ala Moana Beach Park will all be flooded.

Climate change is a continually growing threat for the people of Hawai’i and their future in Hawai’i. Hawai’i News Now reported that, “… by 2060, 38 miles of major roads would be chronically flooded, nearly 550 Hawaiian cultural sites would be flooded, and more than 6,500 structures and 25,800 acres of land near the shoreline would be unusable or lost, displacing roughly 20,000 residents.”

Josh Stanbro, Honolulu’s chief resilience officer and executive director of the city’s Office of Climate Change, Sustainability and Resiliency, told Hawaiibusiness.com,“We can handle a $15 million hit here and a $20 million hit there. But then, all of a sudden, you’re dealing with costs that were never budgeted in the books. And it’s all ramping up.”

Though some people might not be informed about the impact of climate change, the next generation is informed and willing to fight for the future of their home. Teenagers feel they have to do something about climate change, because “It’s our future. The older generations now don’t care as much because they are not going to be here as long as us. We’re going to grow up and have our families and we don’t want our families to live in a world that’s gone to trash,” said Club Terra President Cayla Pabo.

Teenagers in Hawai’i joined together for the Global Cli- mate Strike Protest on September 20, 2019, to demand action about climate change. Pabo believes that the protest will “Bring awareness to it and shows everyone that these groups of people show that climate change does matters and that we need to fix it.”

The future of climate change seems uncontrollable, but the future generation is not giving up without a fight.