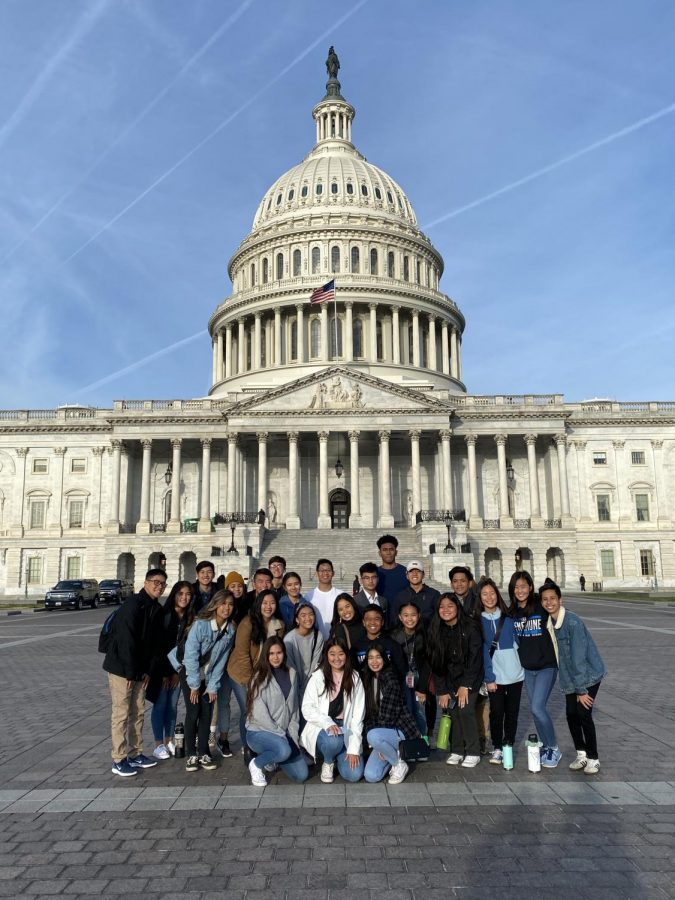 MeneMAC's STN team smiles in front of the Capitol in Washington, D.C.

On March 11th, 2020, a selected group that consisted of 23 MeneMAC students flew out to Washington, D.C., to participate in the annual Student Television Network (STN) Convention. However, the trip was cut short due to the COVID-19 pandemic and the event was cancelled – leading STN organizers to hold a live-stream awards ceremony for prior video submissions in the STN Excellence and Nationals in Film & Broadcast Awards on April 7th, 2020. The team then brought home six excellence awards, with one film amassing five awards.

Now Loading News, which is Moanalua High School’s Broadcast program, received the title of Best Monthly News Show in the South Pacific/International region. Broadcast was also awarded Best Documentary for Stringing a Legacy, which tells the story about the culture of lei-making. Stargazer, a short-film produced by the film team, set a record of five awards in Live Action, Cinematography, Editing, Sound Design/Original Score and Visual Effects.

“We were all on Webex and the yelling was awesome!” MeneMAC teacher Mrs. Kelly Calistro said. “We couldn’t believe [we won] five awards for one film and best documentary! It was an awesome day,” Calistro added.

“[It was] definitely very surreal,” returning senior Daniel Van said. “Nothing like that had ever happened before – we were only dreaming of a sweep, we didn’t think it would actually happen but it showed that our hard work paid off,” Van added.

The STN Convention, which holds Broadcast Journalism and Film competitions, took students months of practice and preparation. Van “knew that our team had to step it up, the competition was getting better so we had to improve as well. I kept that mindset all the way through the practices and to D.C. We had to win.” Van said.

“Upon hearing that the competition was cancelled, I cried!” Calistro said. “I felt bad for the parents who sacrificed and paid for their child to go to Washington D.C. [The students] were super bummed,” Calistro added.

The Washington D.C. trip, although short-lived, provided a great deal of fun and growth despite the circumstance. “Although we weren’t able to stay very long, we were able to make the most of our trip,” returning junior Frances Michelle Uy said. “I remember the time my roommates and I ordered a ton of food and ate it at our room, and more serious moments, like when we met as a team to discuss how we felt upon the convention being cancelled. I think both of these were big bonding moments that I can take away from the trip,” Uy added.

The live-stream awards ceremony ended with the announcement of next year’s convention location: Phoenix, Arizona – drumming up excitement and advice from the ‘newbies’ and ‘veterans’ alike.

“To the underclassmen and STN members next year: make the most of what you got,” returning senior Kaylin Bersamin said. “This includes everything from the practices, to the plane rides, to the downtime you have with your teammates because something as random as COVID-19 could come up and end your trip before you were ready for it to be done. Spend every day of STN like it’s your last,” she added.

‘Newbie’ and sophomore Easton Ikenaga, who is looking forward to competing next year, is “hoping to enter a different category and try new things,” Ikenaga said. “Am I scared the convention will cancel again? Yes, but I’m willing to take that risk because it’s all about the experience, and filming, of course,” Ikenaga said.

The winning video Stringing a Legacy and Stargazer can be viewed on the Student Television Network’s youtube page. For the extended version of Stargazer, click here.