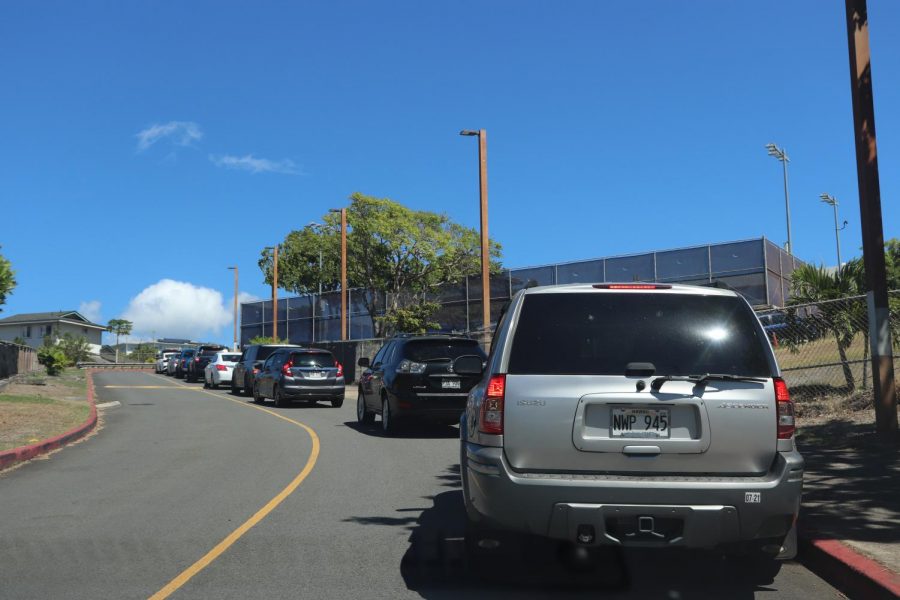 Textbook pickup created traffic that extended down the teacher parking lot and onto Ala Napunani St.

Textbook Pickup
The textbook pick up on August 26-28 left students waiting in lines that wrapped around campus and into the surrounding neighborhood, but it allowed for textbooks to be put into the right hands.

The distribution was held in the teachers’ parking lot and lasted for three days to prevent congestion. Even with the multi-day option, however, students found themselves waiting longer than expected in a line that ended sometimes on Ala Napunani Street.  On one day the line of cars was as far back as the roundabout at Ala Ilima Street.

“Traffic was absurd,” sophomore Caitlann Bonilla said. “I think I could’ve gotten my textbooks sooner if I just walked.”

Most students spent at least thirty minutes to an hour picking up their textbooks. The extensive lines left students and parents wondering why this was the chosen method of pick up.

Globally, people are adapting to the changes that social distancing brings and Moanalua High School is no different. So when students needed their textbooks, Vice Principal Kasey  Lahousse said she  “reached out to the staff inquiring who would need textbooks” and organized a socially distant solution.

The school chose after school hours so as to not interrupt instructional time and only utilized the teacher parking lot so that the main office would be available for the return of textbooks, forms, and to pick up devices.

The pick up left students frustrated and wanting a faster option, but teachers seem to be focusing on the bright side of the situation.

“I thought we did the best we could with the restrictions we were given,” Lahousse said.

Some teachers are even brainstorming ways to make future pick ups more efficient.

Frank Raymond, one of the teachers who distributed Chemistry textbooks said, “Having students sign our paper is out-dated; all books should have bar code stickers on them to expedite inventory.”

Despite its flaws, the textbook pick up allowed students to receive the textbooks needed for their education in a socially distant way.

Instrument Pickup
Instrument pick up for music department students took place last month, August. This year due to COVID-19, there were some setbacks but department officers and staff managed to effectively get instruments to students.

Instruments were distributed in building U101 and students went on their assigned date and time, depending on the class. Band and Orchestra class officers and teachers organized the dates and details of instrument pickup.

“My experience while picking up my instrument went really well! There wasn’t anyone in line when I went in and it was very organized! It was a really quick and easy process. I’ve heard the same from others too!,” said violin player Karri Ragasa.

Juniors Samuel Kim, Sydnie Hirayama, who play the violin and Donovan Higashi, who plays the bass, confirmed that students in the lower orchestras who had borrowed instruments from the school had some difficulties with practicing because the school shutdown, before the pickup. But, instrument pick up went smoothly for the advanced orchestra classes.

Most students in Concert Strings and Concert Orchestra do not have personal instruments which meant that their lines were backed up and longer than that of the Symphony Orchestra.

“The lines were fine, it was very simple, not that complicated,” said Dylan Serrano, a junior who plays tuba in SO.

“They improved the organization with the contracts, by pre assigning them, there was no confusion, you just went in, they gave your instrument and you went out,” added Kolby Yamamoto, a junior saxophone player and drum major for the marching band.

“Instrument pickup was available for percussion if they wanted to bring home something and if they had space at home to do so. They were allowed to take home anything that would benefit them and while supplies lasted,” said Jayden Berano, a junior percussion student in the marching band. He took home snare and bass drums.

The marching band percussion students were given the opportunity to pick up any instrument while supplies lasted. The lines were short because the pick-up was spread out over two days.

Instrument pick up for the music students was efficient and straightforward for the most part, despite the confusion over the pandemic.

“I don’t think anything could have been improved,” given the circumstances, Hirayama said.

“Something I’d hope to keep is the designated days for everyone to come in and for them to bring in their signed contract with them,” Berano said.

Students and parents were impressed with the organization and are looking forward to using the instruments for class.