After 20 years in the making the performing arts center makes its debut on March 12th. 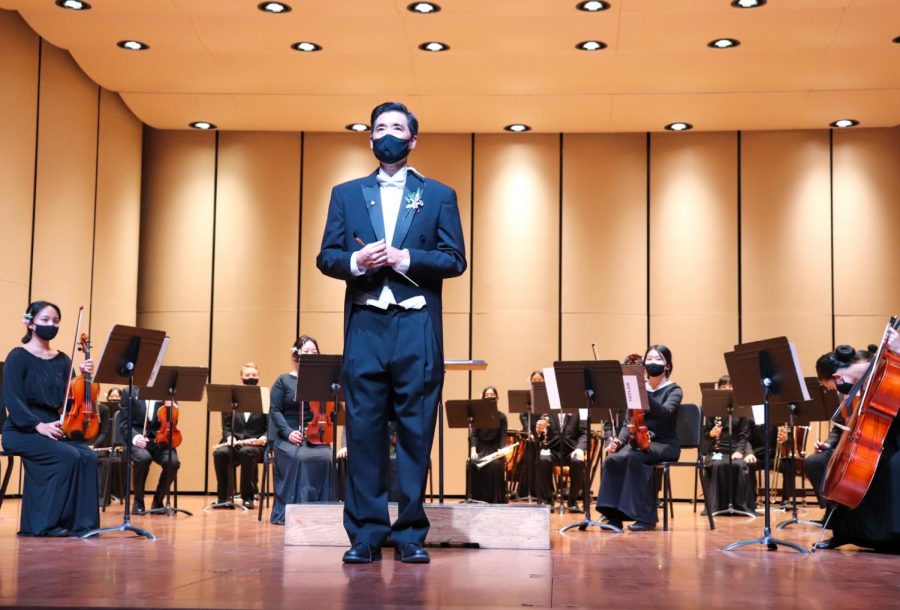 A ray of sunshine hits the tinted glass windows only to be filtered out. Moanalua’s new auditorium is a ray of hope for the music department. After more than 20 years of planning and lobbying at the legislature, the highly anticipated Moanalua High School Performing Arts Center was finally declared open to the public March 12.

State dignitaries including Governor David Ige, First Lady Dawn Amano-Ige, who was a vice principal at Moanalua in 2012, and state legislators attended the dedication ceremony.

Amano-Ige recalled that when she was a vice principal at Moanalua, she had to speak to parents who were unable to attend a performance because of limited seating capacity “and that was 11 years ago.” So this opening “celebrates a long-time dream.” Given the trauma of the last year, she believes “music will play a healing role in our community.”

Senator Glenn Wakai (D, Moanalua) spoke of how amazing it was that the building was built on budget and on time. With a state of the art dance studio, music room, and chorus room, “[the performing arts center] is the crown jewel of the most fantastic music complex in the state of Hawaii.”

With 694 seats and at the cost of $35 million, the Performing Arts Center will be able to host the music, dance, and drama departments’ activities.

Moanalua High School Principal Robin Martin looked back on Moanalua’s history and the bronze sculpture that used to reside by the cafeteria. Almost 14 years ago it was damaged in a robbery attempt. Later this year it will finally be returning home but will be relocated to the auditorium.

Music teacher, Elden Seta and the selected orchestra members played Beethoven’s “Ode to Joy” because “we thought it was the most appropriate way to open this magnificent building.”

The stage itself is the centerpiece: it is the same size as the one at the Neal Blaisdell Concert Hall. The new building will also feature an orchestra pit, a scene shop, a dressing room and a costume room.  It will even be possible to accommodate test-taking.

“I’m excited about the lights and sound, but I’m more excited for the students, the school, and the community who have the opportunity to experience a brand new state-of- the-art theater with all the bells and whistles,” drama teacher Mark Ikenaga said.

“It is a literal dream come true not for me, but for everyone [who was] on the stage and everyone who has been involved” in the program and the project. The facility is “so great. It’s so warm (in the way it sounds,)” said Seta.

“I want to thank Hawaiian Dredging, the construction company,” Martin said. “They were wonderful to work with.”

Martin also credited the former administrators, who first envisioned and lobbied the state legislature for the building in the late 1990s.

“The music directors at the middle school and here at the high school built a world-class music program” that made the need for an adequate facility desirable, she said.

As no public school can receive capital funds without help from the area’s legislators, Martin also cited former State Senator Norman Sakamoto (D, Moanalua), with whom she worked to lobby the legislature when she was a vice principal here, as a driving force. He was later supported by the legislators who followed him.

Many public schools have facility needs, so building an auditorium was no small feat. But according to Wakai, “a performing arts center has been a priority for school administrators and the community for decades.”

“It took determination by a team of lawmakers to gather the necessary funds to build the complex,” Wakai said.

The marquee performances at the new venue will be the music department performances. The Symphony Orchestra (SO) and Symphonic Wind Ensemble (SWE) in particular have brought Moanalua High School national and international acclaim. The SO was first invited to perform at Carnegie Hall in New York City in 1998 and returned in 2005 and 2013. The SWE has performed in Japan and on the mainland.

“It really was the commitment and dedication of the music department students, teachers, staff and the MoHS Band Boosters that spoke for the need for a performing arts center,” state representative Linda Ichiyama (D, Moanalua), said.

After years of going off campus to perform, the performing arts departments will finally be able “to perform on our own campus, in our own home, if you will,” music and choir teacher Rhona Barbosa said.  “When our marching band and color guard performs their marching band festival, The Menehune Classic, here on our campus, there is a deep sense of pride.  I would assume that the same deep sense of pride would also be felt as we grace the stage in our own auditorium.”

The issue of maintenance is always an issue, especially with such a large facility and a busy campus, Martin said.  The school hired two Moanalua alumni, Jensen Ball and Landon Mauricio, who will serve as auditorium manager and technology director, respectively. When productions are not scheduled for the building, they will assist with technology needs at the school.

Martin expressed gratitude that two graduates will be looking after the concrete and glass showpiece.

She said it was important to “have people on campus who care about the building, who care about Moanalua High School” joining the staff. She wanted to make sure the building will be able to support school classes, events and performances, as well as accommodate community events, she said.

Senior Mari Shimabukuro, the Music Department president, said she’s “really looking forward to seeing how it’ll bring everyone together.” She thinks about the memories that are to be made.

Moanalua students are also looking forward to using the facilities regularly. “[We] finally ha[ve] a place we can truly call our own to perform in,” junior and Symphonic Band student Nya John said.

Not only are current students excited about the new auditorium, but Moanalua alumni look upon the new building with mixed emotions. Most share their enthusiasm but express their slight wistfulness.

“I would be lying if I said I didn’t feel as if I was missing out a bit,” Chisana Saliz said. She graduated last year and was in Symphonic Band. “My peers and I were there when the construction first started so it would’ve been cool to see the finished product.”

A few also recounted the memories that the music department gave them when there was no Performing Arts Center.

“I’m honestly a little sad for the students in the future that [will] use [the] venue. I loved the car rides to and from concert venues, especially after a hard day[’s] work with my friends,”  last year’s music department president Jericho Macabante said.

“As a current music education major at the University of Hawaii at Mānoa, I can only hope and dream that my future school will be fortunate enough to . . .  play in it,” Class of 2019 graduate Siena Sonoda said.

The years have seen many student musicians come and go, but one thing remains unchanged: the musicians all shared the same Menehune pride.

“[That building] really is something,” Saliz said.