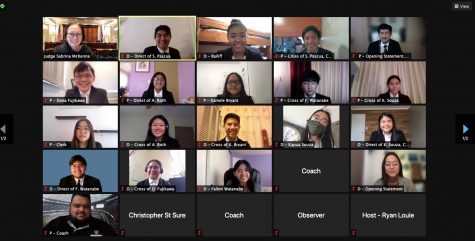 When life presents you with trials, you have no choice but to debate and succeed. That is just what Moanalua’s Mock Trial team did. This year’s team was able to win first and second in state despite a new trial: being all virtual for competitions.

“I’m extremely happy that Moanalua is able to go to nationals once again. A lot of this year’s seniors have been in Mock Trial since their freshman year, myself included, and it was a rewarding experience for us to be able to go to nationals. To also see our rookie team excel and give us a run for our money during state finals was also gratifying,” said Blue team Vice President and witness Vivian Hui.

Trips to nationals are starting to become a routine, given this year marks the ninth win in the last ten years of participating in mock trial competitions.

“I’m very proud of both teams this year because we placed both first and second in the State; this is the second time that our school has had both of its teams place first and second and I’m so proud of how hard both teams worked to reach that point,” added Mock Trial President Neil Ryan Valdez.

Both teams had to adjust their schedules to fit an all virtual competition; this meant even practices were held virtually. Materials were reviewed together which proved as a challenge considering body language and other factors most easily practiced in person. In addition, the team had to take care of technical issues prior to and on the day of the competition.

Mock trial coaches David Suzuki and Brian Kang, both Moanalua graduates and attorneys, were concerned about how to conduct the online practices in preparation for the virtual competitions.

“As with classes, the hardest part was gauging whether the students understood what they were being taught. You don’t know if the students are catching on, confused, or crafting a tool on a second screen,” said Mock Trial Coach David Suzuki.

“We all had to learn how to make persuasive presentations in a virtual environment, where judges could only evaluate the attorneys and witnesses through a screen and didn’t have the benefit of clearly seeing and hearing the students in person,” added Mock Trial Coach Brian Kang.

Although connection and other issues of the sort made it difficult for this year’s competitors, they were able to resolve those issues and carry on with the competition. “We ensure[d] the person having difficulties is able to work it out, but if they couldn’t we had to plan on who would fill in the role,” said Blue team Vice president and attorney Amanda Raphaella Ibanez.

This year’s competition was held all virtually over the course of one week. In any other normal school year, competitions would usually be held in person over the course of a month. “Which gave us less time to fix any issue that we noticed during the last trial to prepare for the next one. The virtual format also gave us the opportunity to go against teams from Kauai during the regionals rather than just seeing them at States,” said Valdez.

Preparing to go up against Kauai was a challenge due to the lack of knowledge provided and no encounters with the teams in person. “Previous years it was easier to tell how much they practiced depending on their usage of notes, their clarity and tone, etc,” said Silver team member Daniel Jung. Both teams had to practice based off of their level alone, which meant relying more on individual evaluation and team members for support.

“The transition from regular in person learning to virtual learning is already a testament to how difficult the change can be. It was difficult for both the team and the coordinators of the competition. For the coordinators, it’s hard to remodel a competition that relies so heavily on in person executions. Holding a trial in the comfort of your own home doesn’t have the same effect as it does in an actual jury room,” said Hui.

Competitors expressed their numerous concerns about mock trial competitions and activities being held all virtually. The experience of mock trial in itself has been completely redefined this year due to COVID-19 and its circumstances.

“I would say my mock trial team has a lot of competitive spirit, we’d be pumped to win against a team before the trial starts, and then more pumped afterwards to hone our performances to be even better next time,” said Silver team President Aris Ancheta. “There were times we were nervous but we all had a lot of fun and we all love winning,” said Ibanez.

Although students were presented with additional challenges they were still able to enjoy the experience even without the same interactions and procedures. If anything, the challenges brought this year has allowed a rapid adjustment and progress of both teams.