Tesla pulls up to Drivers Ed 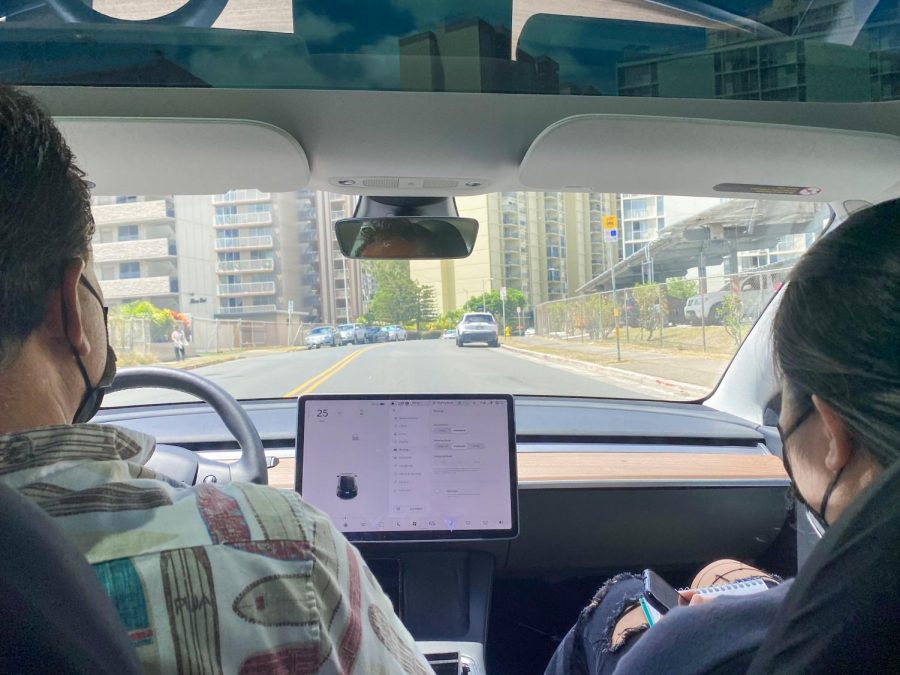 Drivers ed teacher, Mr. Bush, drives Hayley Meyer around in the new Tesla to show her the car's features.

Elon Musk really knew what he was doing when he made the Tesla, or at least that’s what Charvis Bush, a Driver’s Education teacher here at Moanalua High School, thinks. Bush owns a Tesla Model 3 and ever since May 2021 he has been using it to teach students how to drive.

“This [the Tesla] is the safest car,” Bush says. “I’m not worried about them [the students] driving it.”

The Tesla Model 3 has four different cameras. There are two located on the sides, another on the back, and one dashcam. The dashcam’s footage can be downloaded so it can be watched if there is an accident that occurs.

The car also has different types of braking systems. The one that Bush uses while driving himself, is the auto-brake feature, which automatically stops the car once his foot is off the gas pedal. The feature that he uses with his students is the normal braking system, which needs the students to physically press the brakes. This teaches them how to actually drive with a standard car that needs them to press the break. There is an emergency automatic brake system that can detect pedestrians, other cars, and objects. This system ensures the safety of the student driver and the passengers inside of the car.

“One time, my student got too close [to another car],” said Bush. “and it actually stopped the car.”

The car is customizable to make the students as comfortable as possible while driving. There can be up to ten different saved profiles on the Tesla. Each of the profiles could change the seat position and it could even change the steering wheel position. Every student is different and will have a different build. Having this feature makes it easier to learn how to drive for both the student and the teacher.

The Tesla is an electric car so it doesn’t need gas but it does need to charge. It charges up to 250 kilowatts and each student uses around 50 per session. Bush normally takes 4 students per session but can take 5 max.

Although this car is one of the safest cars on market, it is also one of the coolest cars on market as well. The car doesn’t have a key but instead all you need to unlock the car is your cellphone. If you ever get stuck waiting for someone then you can pull up your favorite Netflix series, play games, or even sing karaoke with surround sound. Bush is very proud of his purchase and won’t be giving it up anytime soon.

“This is the best car,” Bush said, “I wouldn’t buy another car.”