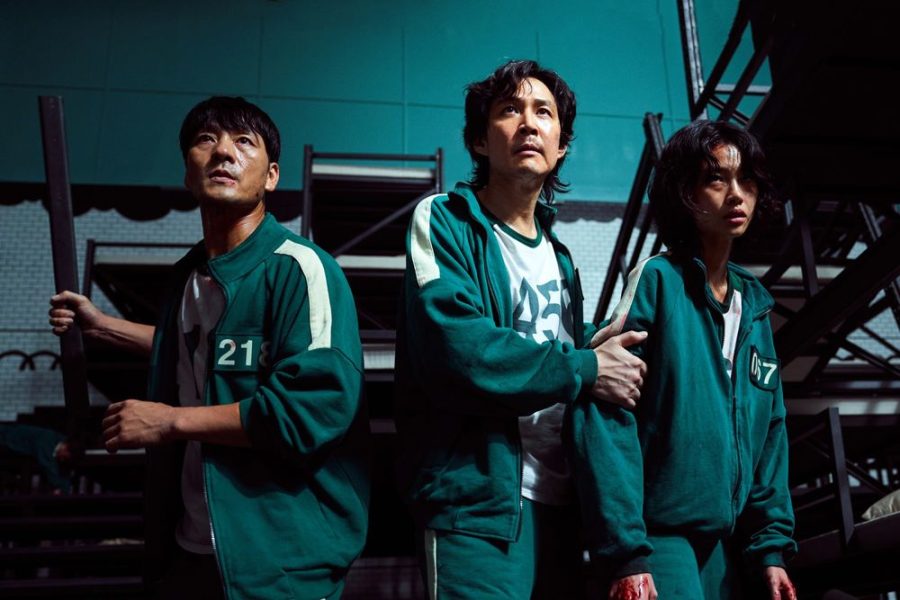 “Red light, green light!” The South Korean Netflix original Squid Game, directed by Hwang Dong-hyuk, follows a debt-ridden Gi-Hun who participates in the games along with 455 other players for a chance to become a millionaire. Those who lose will be eliminated, in other words, killed.

The popularity of the show can be credited back to the recent “K-Wave” with the rise of Korean pop groups like Blackpink and BTS, and Korean films like the 2019 movie Parasite directed by Bong Joon-ho. However, Squid Game’s rise of Netflix domination is not solely due to the popularity of Korean media but rather its striking cinematography, talented actors, episodes with shocking reveals that end in cliffhangers, and most importantly, the unsettling parallels between the players and the at home Netflix watcher’s socio-economic status.

The situation with Gi-Hun’s grandmother is common among the lower economic classes. Many face a dilemma similar to Gi-Hun’s grandmother. To work or not to work, knowing that they cannot afford to take sick leave to go to the hospital to treat an injury nor pay the medical bills. The inaction results in the injury getting worse.

According to a recent Jungle Scout poll, 56% of Americans reported living “paycheck-to-paycheck,” a risky living style that means their cost of living meets or exceeds their income, resulting in a lack of savings. Gi-Hun and his grandmother along with more than half of the American population share the same dilemma.

During the time of the pandemic, economic inequality is emphasized, leading to financial instability. Similarly to the indebted Squid Game players, whose life outside the games are filled with challenges and uncertainties with being in poverty and a lack of government assistance. Further exacerbating the life or death decisions families must make within the limits of their financial abilities.

Squid Game ends with Gi-Hun dying his hair bright red and boarding a flight to the United States to be with his daughter but decides to turn back at the last minute. Squid Game needs to be “green lighted” for a second season so viewers can get answers to why Gi-Hun turns down his opportunity to see his daughter, and encourage these conversations about economic inequality.

Although money does make life easier by relieving some stress that comes with financial instability, it ultimately doesn’t buy happiness. As seen towards the end of the show, Gi-Hun, the victor of Squid Game lives an unsatisfying life worse than before. His knowledge of how he obtained that money haunts his conscience.