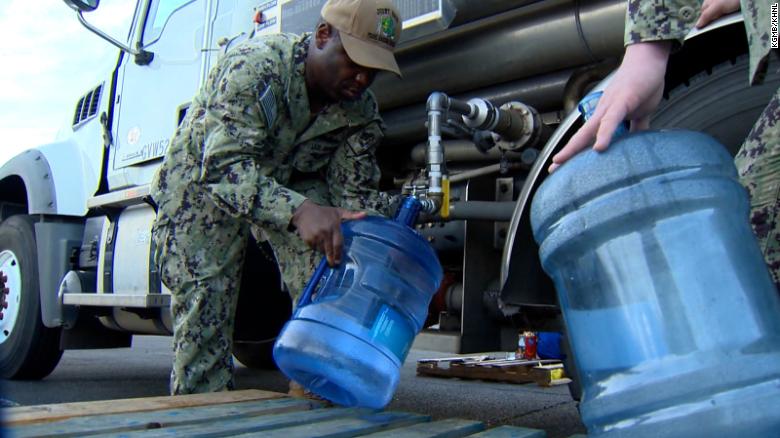 The detection of petroleum in the water system connected to the US Navy’s Red Hill wells late last month has kept many Moanalua High School students on edge. Numerous reports have been made on how the water has visibly swirls of oil and smells of gasoline. In addition, people in the area have complained about nausea, headaches, rashes, and stomach aches.

“If you pour water in a glass and look at it from the side, you can see oil floating at the top,” junior Oliver Salvacion, who lives in Aliamanu Military Reservation, said. “It’s kind of muddy.”

“My family could smell it,” sophomore Brianna Richardson said. “I wasn’t around it enough to tell, but I’m glad I did my laundry last weekend,” she said late last week.

At first, Navy officials were reluctant to say if the water was safe to drink, but it last week agreed, at the urging of the Honolulu Board of Water Supply, to shut down one of the water source that supplies water to Aliamanu Military Reservation, Halsey Terrace and Red Hill, among other military areas.

Senior Abigail Galman said she and her family accepted the military’s offer to relocate families to hotels around the island while the Navy determines the extent of the water contamination.  Galman said she is at the Hilton Hawaiian Village.

“My mom had headaches from the smell,” Galman said. “That’s why we had to move (to the hotel).”

According to Honolulu Civil Beat, the Hawaii Hotel Alliance made 1825 rooms available for military families who were affected by the contaminated water. Hotels that are providing these rooms include Hilton Hawaiian Village, the Hilton Waikiki, Outrigger hotels, The Hyatt Waikiki, Kyoya Hotels, and the Double Tree Waikiki.

Regardless of the many confusing claims by various officials, it has recently been discovered by a lab in Hawaii that petroleum was present in the water. The amount and type are not known yet and will be further tested in a lab located in California. Even with all this testing, it does not solve the issues that have been caused by this event. Many students and their families have been affected by the fuel leak, unable to wash their laundry, and having to resort to using jugs/bottles of water to wash their hands and maintain oral hygiene.

Although they now have access to clean water new problems arise. Being farther away from school means students have to wake up earlier than usual just to get to school on time. With the tourists and the addition of military families residing in Waikiki, parking and finding places to eat have been difficult due to how crowded the already busy city has become. This change in living situation has altered students’ and their families’ schedules.

Junior Skylar Parks said her family moved last Friday to a hotel in Waikiki and are allowed to stay for ten days.

“I left the hotel really early to drive to school,” she said.  If they need anything, they stop by the house since it is nearby, then go back to the hotel.

Students have expressed their frustration on how the fuel leak has negatively impacted their lives. Not being able to perform essential everyday tasks can take a toll on life, and it seems that it will take a while to have clean water once again.