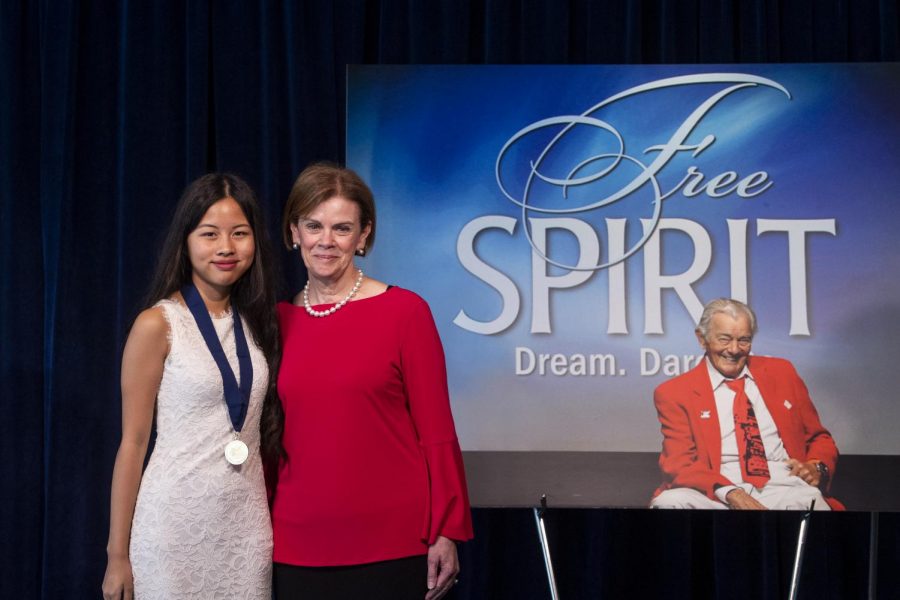 Al Neuharth, founder of the first nationwide newspaper, USA Today and the Freedom Forum Institute, was the champion of his own motto: Dream, Dare, and Do. Neuharth dreamed of a national paper that defied conventional journalism tactics, dared against the many critics who mocked his vision, and did a newspaper that forever changed the way America would receive its news.

I was given the opportunity to represent Hawai’i as a scholar in the Al Neuharth Free Spirit and Journalism Conference, an all-expenses paid trip to Washington, D.C held in June. I would be alongside fellow rising high school scholar from each state (including the District of Columbia) to gain insight from some of the most respected journalists in the field. It was a dream of mine that came true, a once-in-a-lifetime experience to learn more about a love of mine from others who were just as passionate – if not more.

Taking my first steps onto D.C, it was a moment in itself. I was literally stepping onto the once – swamp that made and constantly makes history. Almost every building had some historical significance – from the White House to Ford’s Theatre – this was American history and it felt so surreal to see it in person. From the environment itself to attending the conference, it was intimidating to say the least. Fellow scholars with dreams similar to mines were bright, well-versed in the field and oozed passion especially in the realm of politics.

In the heart of American Democracy, came the First Amendment that granted rights to freely express religion, speech, press, assembly and petition. The conference, sponsored by the Freedom Forum Institute, was centered around those five rights. Speaker after speaker, lecture after lecture constantly pressed and inscribed in 51 teenage minds the importance of journalism in upholding those rights for future generations. They dared us to be out of our comfort zone, to make connections with the people we met, to speak truth and to push for transparency, a mission that still needs to be accomplished in this day and age.

51 scholars stepped out of the conference, ready to challenge and break the stigma of “Fake News”. All those presentations and lectures have only equipped and made us ready to dig deep in the next feature, column or investigative story for our schools and in our future. This experience made me learn how valuable it is to be a “swiss army knife” in the world of journalism – to be knowledgeable in all styles in order to make it.

Not only was I given the challenge in a journalistic sense, I was dared to make 50 new friends in one week. Not only did I connect through the common bonds of political parties, journalism styles or current event topics, I was able to connect with people from various backgrounds. It’s rare to meet someone from every single U.S state, let alone be friends and know each individual personally.

One quote that stood out to me from that week was from Charles Haynes, founding director of the Religious Freedom Center. As he spoke passionately on the podium, discussing the importance of protecting religious rights, he uttered “Tomorrow is today, it is the fierce urgency of now”. It rang to me the importance of urgency in not just journalism, but in my life as well. It gave me a newfound reason to concentrate on daily tasks and to tackle challenges head-on rather than saving it for a later day. This is my new, life-lasting task – to do.

As part of this year’s staff for Moanalua High School’s newspaper, Na Hoku O Moanalua, I can’t help but be excited to share all the information I’ve been given from this conference, ready to face each issue and story with newfound care to detail and fact. In the future, I hope to one day be the journalist that the world needs, that reports with accuracy and good reason. But as for now, I can say that I dreamed, dared and did at the Al Neuharth Free Spirit and Journalism Conference.