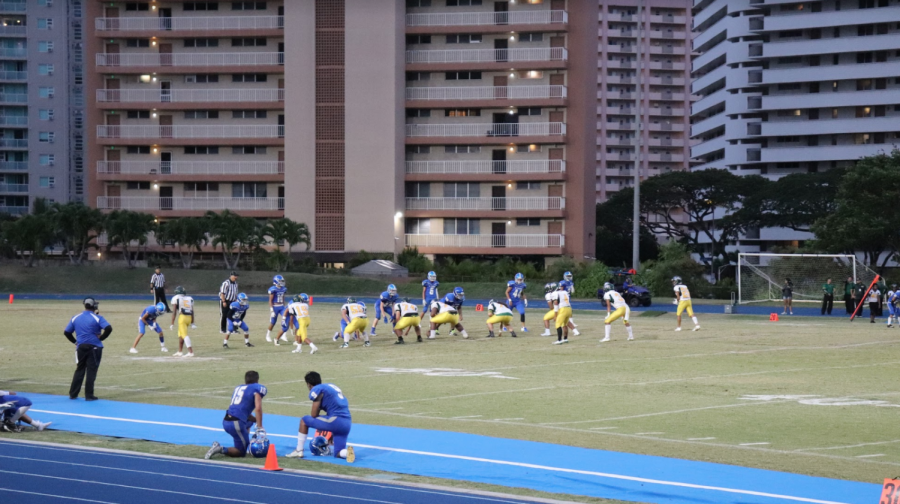 Our JV team was able to play against Leilehua before the lights went out, and the varsity game was cancelled.

Moanalua High School’s field lights faced yet another malfunction on August 23rd prior to the varsity football game against Leileihua High School. At 7:00 p.m., both varsity teams were ready to play only to realize that two of the field lights would not turn on. The game was then rescheduled to one week later, and this time on Leileihua’s turf.

The two lights on the left side (from the bleachers) unexpectedly failed to turn on as the junior varsity game approached its half-time. Soon after, the varsity game was cancelled.

“It’s unfortunate that the lights went out again but it’s not anything we’re not used to,” says senior Rashod Tanner. “Same game, but now we’re in a different place,”.

This was not the first time the field has experienced such an issue. A similar situation occurred during the 2018 Homecoming week at Moanalua. The lights on the field and the gym had failed to turn on. Volleyball festivities were cancelled and the Homecoming game was relocated from Moanalua to Radford High School.

It was disappointing to Junior Michael “RJ” Javar, “because everyone was physically and mentally prepared for the game and it just ruined everyone’s vibe that the lights went out and we couldn’t play.” .

The players are disappointed about the situation, but still try to maintain an optimistic attitude. “I face problems like these all the time, and I know how to overcome these kind of obstacles. All I can do now is to focus on what’s next for me,”  says senior Aukai Grace.

Not only has this affected the football game scheduled, but their trip to Vegas as well. “It really messed up our schedule.” says Assistant Coach Edwind Wise. “Trying to get them acclimated to 100 degree weather, we’re actually supposed to practice this week at 2:30, 3:00 afterschool when it’s [hotter] for them to [start] to get acclimated to the weather in Vegas,” Wise adds.

The Na Menehune football players leave to Las Vegas, Nevada on Tuesday, September 3, 2019, and will return on Sunday, September 8th.